Learn How The Ear Works

The hearing mechanism in the human body is a highly sophisticated and robust system. Sound is transformed from pressure waves in the environment to mechanical energy. This is accomplished through a complex system of levels and area ratios. Through electrochemical reactions, this mechanical energy is transformed into something that the brain recognizes as music, warning signals, sounds of nature and meaningful conversation. Simply described, the ear can be broken into three basic sections known as the outer, middle, and inner ear.

The Outer Ear funnels the sounds around us down to the ear drum. The outer ear is made up of the pinna (the ear that you see) and the ear canal. They act as resonators, which amplify certain pitches, or frequencies, of sound before they reach the eardrum.

The Middle Ear is where sound is changed from pressure waves to mechanical energy. The ear drum (tympanic membrane) is made of layers of skin, which are stretched tight like the top of a drum. As sound enters the ear canal, the eardrum begins vibrating. Attached to the eardrum are three tiny bones called the Hammer (Malleous), Anvil (Incus) and Stirrup (Stapes). Their job is to transfer the vibration of the ear drum to hydraulic waves in the inner ear.

The Inner Ear is where the nerves pick up sound for delivery to the brain. Called the Cochlea, the inner ear is a fluid filled bony labyrinth, which houses thousands of tiny hair cells. The hair cells work to detect the pitch of the pressure waves and convert them to electrical impulses for the brain to receive and interpret.

Anatomy of the Ear 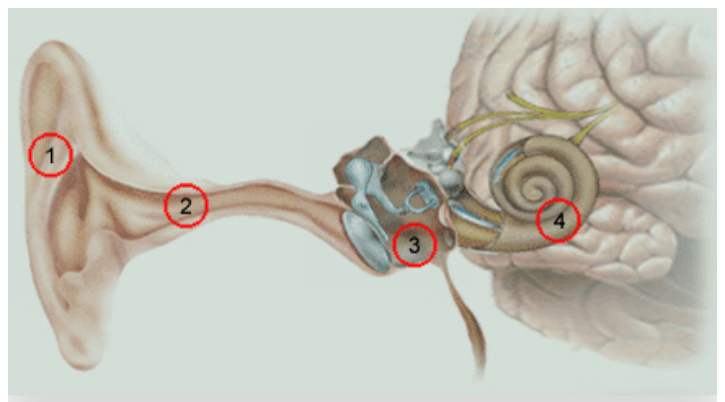